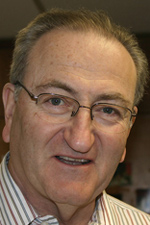 Dr. Martin Steinbach is Distinguished Research Professor of Psychology, Faculty of Health, and a member of the Graduate Programs in both Psychology and Biology.  After receiving his PhD from the Massachusetts Institute of Technology, he came to York University in 1968 as a Research Associate and Special Lecturer in the Department of Psychology.  He became a Professor in 1981.

At York, Dr. Steinbach has been Chairperson of the Department of Psychology, Atkinson College, and was a founding member of the Centre for Vision Research.  He chaired the Senate Committee on Research in 1980-81.  In addition, he is a Professor of Ophthalmology and Director of Research, Department of Ophthalmology and Vision Sciences, University of Toronto.  He is the Director of Vision Science Research at the Toronto Western Hospital

He studies eye movements and visual development processes in people with disordered vision, and has described his findings at research and clinical institutes around the world.  He has published over 140 peer-reviewed articles and invited book chapters, and has obtained over $2 million in research funding. He has served on the Advisory Board of the Canadian Institutes of Health Research, Institute of Neuroscience, Mental Health and Addiction, and is the President of the Vision Health Research Council of Canada.  He represents Canadian researchers as a member of the National Coalition for Vision Health and is an Advisor to the Canadian National Institute for the Blind as well as the Canadian Foundation Fighting Blindness.  He is a past Trustee and Vice-President of the Association for Research in Vision and Ophthalmology, and has been named winner of the 2009 Karl Kupfer Award by that organization.

I study eye movements and visual processes in people with normal or with disordered vision. People with eyes that do not align, a condition called strabismus, will frequently have surgical or pharmacological treatment of their eye muscles. By studying the adaptations made after these treatments, we gain insight as to the kinds of information the brain uses to stay informed about the positions and movements of the eyes. I also study children who grow up with only one normal eye, either because the other eye has been removed in early childhood because of retinoblastoma, or because of an early onset strabismus. The changes in various visual functions (Depth perception, acuity, eye movements, etc) gives us insights about the plasticity of the developing visual system as well as suggestions as to the timing of intervention.  We are also studying visual function in patients with age-related macular degeneration, training their eye movements to become more useful.